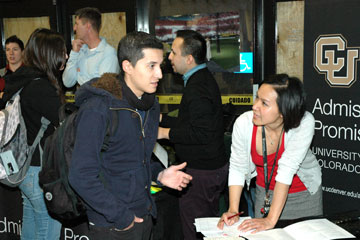 The many routes to attaining a bachelor’s degree, especially if you begin at a community college, can be confusing. That’s where Admission Promise steps in, easing the transition to a premier university — specifically, the University of Colorado Denver.

The program’s goal is simple: Help students transfer smoothly from community college to CU Denver and achieve their goal of earning a bachelor’s degree as efficiently as possible.

Launched in spring 2012, Admission Promise is steadily growing with students participating from a wider network of community colleges. Going into the program’s second year, the program has about 230 active students and grows each semester, said Nimol Hen, Admission Promise coordinator and director of the Academic Success and Advising Center.

More than 4,000 students with four-year college ambitions have indicated interest in the program. They do so by clicking a box on their online community college application or by inquiring through the Admission Promise website.

Students receive counseling from advisors both at their community college and at CU Denver to ensure a smooth and on-time path to a bachelor’s degree. Upon completing an associate’s degree and earning a cumulative 2.7-or-higher GPA, students will be admitted to CU Denver without paying an application fee.

“I’m just encouraging as many students as possible to take advantage of this opportunity,” Hen said. “It’s a good chance for students who want that CU Denver degree but can’t afford to go there for one reason or another right now.”

That was the case for Samuel Gomez, a first-year student at Community College of Denver. He wanted to attend CU Denver, but couldn’t afford to enroll right out of high school. He’s working toward his associate’s degree, then a bachelor’s in business administration at CU Denver.

“They give me advising for next semester — basically what classes to take that will transfer over to the university,” Gomez said. “It’s really helpful and makes everything better.”

Admission Promise is an agreement between CU Denver, which spearheaded the idea, and the Colorado Community College System. It builds upon existing statewide transfer guarantees, articulation agreements and transfer guides.

“It takes the guesswork out of their academic planning,” said Michel Dahlin, PhD, senior project manager, Office of the Chancellor. “If the students follow the Admission Promise requirements they will be admitted to CU Denver. When they get here they’ll be more confident because they will have visited the campus, have already met some faculty and have been to our various student-services offices, such as financial aid.”

As part of the program, first-year community college students are assigned a CU Denver academic advisor who meets with the student each semester. The advisors make sure the student is selecting courses needed to earn an associate’s degree and are able to transfer to CU Denver as a junior. Students are also invited to CU Denver events, workshops and activities.

“This is a way for not just admission folks, but academic advisors to answer specific questions of CCD students who may transfer to CU Denver,” Lagerblade said. “We’re all here to help students — however that happens is helpful.”

Dahlin said the program has helped CU Denver strengthen ties to the state’s community colleges. “A lot of community college advisors have so much to do,” she said. “…. So we try to make it as easy as possible for them. That’s why we’re going to their campuses. We want to be a friendly face and go the extra mile.”

As for equally-busy CU Denver advisors, they make face-to-face contact with community college students on a semester basis and also advise them online or by phone.

By the time the students apply to CU Denver they are well-prepared and already consider themselves CU Denver students, Dahlin said.

Some academic programs, such as engineering and most within the College of Arts & Media, aren’t part of Admission Promise because their course sequences require students to transfer before junior year.