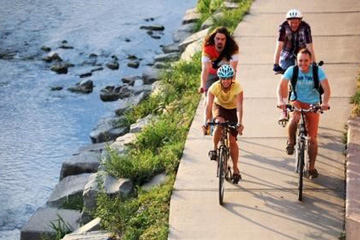 Local governments should use bike-to-work days to find out from participants why they’re attending and — more importantly — what prevents them from biking more often, according to the study.

“While single-day promotional events might not be a big influence on people deciding to bike again the next day, bike-to-work day does seem to have the ability to capture a wide range of bicyclists and provide insights into the barriers to increasing their bicycling,” said Wesley Marshall, assistant professor of engineering at the CU Denver College of Engineering and Applied Science, who co-authored the study.

Kevin Krizek, a professor in CU-Boulder’s Program in Environmental Design, who also co-authored the study, added that people from all walks of life are coming to bike-to-work events.

“If cities know why people want to get out on their bikes, they can do a better job of building on that information,” said Krizek. “Better yet, if cities know what’s impeding people from cycling, they can mitigate those obstacles by intervening with new policies.”

For example, if safety with regard to proximity to motor traffic is a concern for bicyclists, cities can explore solutions such as dedicated bike lanes and “back-in angled” parking, which requires motorists to back vehicles into parking spots so they have a forward view of passing cyclists when pulling out, said Krizek.

Daniel Piatkowski led the study, which is published in the Journal of Urban Planning and Development. Piatkowski was a doctoral student at CU Denver, the premier research university in Denver, at the time of the research and is now assistant professor of urban studies and planning at Savannah State University in Georgia. Rachael Bronson, a master’s student in civil engineering at CU Denver, also co-authored the study.

Almost all large cities in the U.S. promote bike-to-work events at least once per year, according to the paper. The events commonly consist of free breakfast stations along popular bicycle routes, coordinated group rides, challenges among local businesses, giveaway items such as T-shirts and media coverage.

For the study, more than 1,000 participants from Denver’s Bike to Work Day held in June 2012 answered survey questions. The questions measured the types of participants and their behaviors, finding a vast range.

Some of the participants reported they bicycle to work only on the day of the event and others reported commuting by bike year-round. Some were motivated to attend because it was a fun activity while others wanted to raise awareness around the healthy and environmentally friendly mode of transportation.

Some had a long history of participation in Bike to Work Day while others did not.

The survey questions also asked participants about their perceived barriers to bicycling. The results included concerns about safety and infrastructure; convenience and weather conditions; and cost and bicycle storage.

“The variety in feedback shows that trying to distill issues into a singular motivation and, subsequently, a singular policy intervention to encourage commuter bicycling is difficult,” said Krizek.