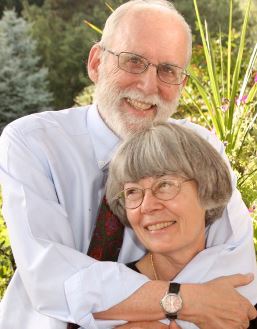 From his office on the 14th floor of the Lawrence Street Center, Bob Damrauer has an eagle’s eye view of CU Denver’s new Academic Building as it moves toward completion, beam by beam.

To Damrauer, a professor of chemistry, special assistant to the provost and newly appointed associate vice chancellor for research, the building has come to represent more than just a new center for student and academic life at the university. Damrauer is hoping that the opening of the building in 2014 will coincide with the first presentation in the “Chancellor’s Distinguished Lecture Series,” a series of talks by noted leaders in science, technology, engineering and mathematics (the so-called “STEM” disciplines).

The STEM lecture series is the brainchild of Damrauer and his wife, Lennie Damrauer. The talks will be made possible by a generous donation from the Damrauers, in honor of their parents, Martha and Karl Kohn and Rose and Clarence “Butch” Damrauer.

“My mother always taught me that it is important to give back,” Bob Damrauer said. “It’s fun to give, because people appreciate it.”

Damrauer has earned recognition as a scholar in computational and gas-phase chemistry, as well as organometallic chemistry. Within the university, he is highly regarded as a mentor to young, pre-tenure faculty, a guiding light to the chemistry department in the College of Liberal Arts and Sciences and a supporter of young chemistry students through the Robert Damrauer Scholarship Fund, which was created to honor his contributions to the university.

Lennie Damrauer was a long-time professor in chemistry before taking up a career in computer science. She worked in information systems at Children’s Hospital Colorado for more than 20 years. After retiring from the hospital, she returned to CU Denver to work in the registrar’s office.

When they made their gift, the Damrauers envisioned a lecture series based on a United Kingdom (UK) model—the Royal Institution’s CHRISTMAS LECTURES®, established by British scientist Michael Faraday in 1825. The CHRISTMAS LECTURES® are demonstration-packed, fun-filled science events, designed for a general audience and broadcast on television in the UK. In that same vein, the Damrauers hope the Chancellor’s Distinguished Lecture Series will bring a well-known person every year to speak on STEM topics, not just for other scientists but for the Colorado community.

“The CHRISTMAS LECTURES® are the hottest ticket in London at Christmas,” Bob Damrauer said. “I want that to happen here. I want this to be an opportunity to make CU Denver better known in our community.”

Damrauer makes one thing clear: He doesn’t want to be responsible for running the lecture series. Nonetheless, he does have some fantasy lecturers in mind drawn from history, including theoretical physicist Richard Feynman, astronomer Carl Sagan, and even Michael Faraday, whose inventions set the foundation for electric motor technology. In Damrauer’s mind, all these scientists had one thing in common.

“They were experts, but they knew how to talk to people,” Damrauer said.

With each passing week, the progress of the Academic Building construction reminds Damrauer that the launch of the lecture series is getting closer. It’s also a reminder that his family has given a meaningful legacy to the university, to which he has devoted virtually his entire working life and his wife has devoted many years.

“My wife always said that whenever they raised money in her workplace, the people who had the least gave the most,” Damrauer said. “I have given money for 40 years to CU Denver. What better place to give back?”