Lauren Fontana used to spend her days living in code. A graduate of the University of Michigan with a BSE in computer science in engineering, she designed programs for the health care industry. But in 2004, she felt compelled to take a different path. “As I was sitting in a cubicle, writing code every day,” she tells me, “here was this huge movement of people in 16 states voting on whether I could get married. And I kind of thought, ‘What am I doing?’”

Since 2004, Fontana has done quite a lot: she obtained a law degree, moved to Colorado, worked for the State Supreme Court, became a legal advocate for incarcerated people and became a civil rights attorney. Building off her work in individual litigation, Fontana now hopes to “look broader,” tackling the “big issues” of accessibility and discrimination in higher education.

As an Americans with Disabilities Act (ADA) and Affirmative Action coordinator, Fontana uses her flexible expertise to work with employees, supervisors and hiring committees at both CU Denver and CU Anschutz in order to ensure our work lives are more equitable. Fontana sat down with Today to tell us what justice means to her, and to explain how the University of Colorado Denver | Anschutz Medical Campus is working toward it.

Could you describe what a day in the life of an Americans with Disabilities Act (ADA) and Affirmative Action (AA) compliance coordinator looks like? 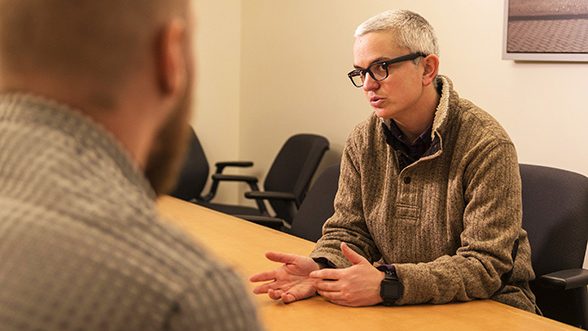 What do conversations about employee accommodations typically involve?

We have a form that the employee takes to their doctor that asks a standard series of questions, essentially determining if the employee has a disability that’s covered by the ADA. The employee works with their doctor to figure out what might be the best possible solution, and then they bring that either to me or to their supervisor, and we figure out if what they’ve proposed works in terms of their business unit functioning.

It’s sort of a puzzle between the employee, the doctor, the supervisor and me figuring out what’s going to enable the employee to do their job in a way that works for the department and works for them.

Are there things about the ADA that you wish people understood better?

A lot of people view accommodation as “cheating,” whether accommodation means giving a student more time to take an exam, or giving an employee an extra break because of a medical condition. There’s pushback around the idea that accommodation isn’t fair.

“Equality” is giving everyone the same thing, no matter what. “Equity” is giving everybody what they need to have a fair shot, to level the playing field. I wish we could get away from this idea that giving someone an accommodation is like giving someone an unfair advantage; it’s not – it’s enabling them to do the same thing that someone who doesn’t need an accommodation can already do.

I know that you have a background in law, but how did you get started in ADA and AA work?

Before I came to CU I was a civil rights lawyer in private practice. I also taught in the civil rights clinic at the University of Denver’s law school for a couple of years. I got to the point where I didn’t want to litigate anymore, but I still wanted to use my civil rights and legal background, so I ended up here in a civil rights investigator position. That was a perfect transition.

What inspired you to work in equity and civil rights?

I was an engineer before I became a lawyer. I was a software engineer, and in the 2004 election, 16 states had anti-same-sex marriage state constitutional amendments on the ballot, including my home state of Ohio, and Michigan, where I was living at the time. As I was sitting in a cubicle, writing code every day, here was this huge movement of people voting on whether I could get married. And I kind of thought, “What am I doing? Nobody cares about this code that I’m writing.” So I decided to apply to law school.

I wanted to do gay rights policy work, but then I realized that was too close to home. So I ended up shifting toward advocating for people with other marginalized identities that I don’t necessarily have. I was more productive as an advocate for other folks.

Around your civil rights and equity work, do you have a particular philosophy? Is there a quote you point to and say, “That’s the kind of justice that I’m working toward?”

The specific quote is so important to me that it’s tattooed on my arm – is “Silence is betrayal,” which is from a Martin Luther King, Jr. speech about the Vietnam War.

The gist of it, to me, is that if you’re not speaking out for other folks, you’re really not doing anyone any justice. And that can look like different things. So, if someone else doesn’t feel safe, or doesn’t have the emotional capacity, or just doesn’t feel like they should have to advocate for themselves, then that’s the time to step in.

What are the most common misconceptions around affirmative action?

I think the most common misconception is that affirmative action is a “quota system” –  it’s just not.

In the context of employment, the whole idea is that if we’re not discriminating against people, then the pool from which we’re selecting employees should look pretty similar to the people we select. That’s just probabilities. The reasoning behind having an affirmative action plan is that, absent discrimination, we should have a representative number of all marginalized groups.

This idea is that, historically, employees and students have been predominantly, if not all, white. If we keep doing what we’ve always done, that’s what we’re going to get, leaving out vast quantities of people who deserve to be here.

HAVE QUESTIONS ABOUT EQUITY?

If you have questions or concerns about accessibility, Title IX, or harrassment, please reach out to the Office of Equity.

If you weren’t an equity coordinator, what would you be?

I would be a farmer. I would grow all of the vegetables, and that’s what I would do all day. We’re working on expanding our garden at the moment, because the first year we planted, everything got killed by bindweed. So, we’re building raised beds – we have two of them, out of the 10 we plan to have. That’s what grounds me.

What gets you up every morning, and what keeps you up at night?

In the summer, I get up early to play in the garden before work. But really, what gets me up is being able to come up with creative ways to solve problems, and that process – particularly here. This whole office is very collaborative; I talk to my colleagues all the time. Having that sense of community around social justice issues is really motivating to me.