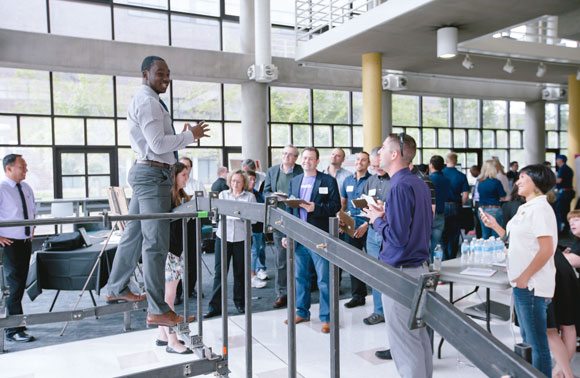 Any nervousness Skyler Saleh had about presenting Team Stratus’s project to a group of judges is long gone. He smiles and launches into the ambitious scope of his team’s robotic navigation system: “We want to make the state-of-the-art robots available to anyone.”

Saleh gives an enthusiastic overview of some of the software’s applications — the robotic rover can provide vital visual information to first responders at fires, avalanches, building collapses and other emergencies — and then hands a remote-control console to a visitor. Within moments, the visitor, a neophyte to the technology, is piloting the small rover through a crowd of feet.

Saleh says the robot uses a square-shaped module, attached simply by Velcro, to see and relay its environment in 3D, essentially the same way a human can. “We made this (module) so general it can fit on any platform — it doesn’t even have to be a robot,” says the electrical engineering student. “You can build this into a helmet for a blind person and it can give them audio instructions about what’s going on around them. It can be integrated into a fireman’s helmet and project what the rooms look like behind certain walls that other firemen have seen.” 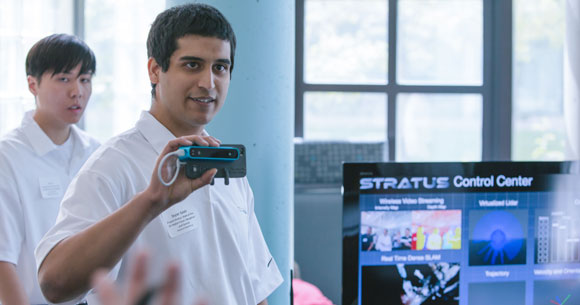 Skyler Saleh of Team Stratus explains how the module mechanism works as part of the team’s robotic-programming project. Team Stratus won the overall prize in this year’s design competition. Photos by Trevr Merchant.

This is the kind of excitement and innovation that CU Denver electrical engineering alumnus Don White (class of 1965) envisioned when he and his wife, Karen, became sponsors of the annual College of Engineering and Applied Science‘s (CEAS) Engineering Senior Design Competition many years ago.

“I don’t even know what they’re doing now,” White says with a chuckle while surveying the students’ high-tech projects. “I like to see their enthusiasm. When they start talking about their projects you can’t turn them off. They’re really into it.”

Marc Ingber, dean of CEAS, notes that judging day—the culmination of the competition—is actually when the students have the most fun. “I think their mood changes from Thursday to Friday. On Thursday, they’re still under a lot of pressure trying to get everything done,” he says. “It’s a huge undertaking — the fundraising, the design work, and the building of the projects from scratch. Some of the students put their own money into it.

“But at the end of the day, they’ve done really well, so on Friday it’s a day of celebration,” Ingber says. “They get to show people what they’ve accomplished.” 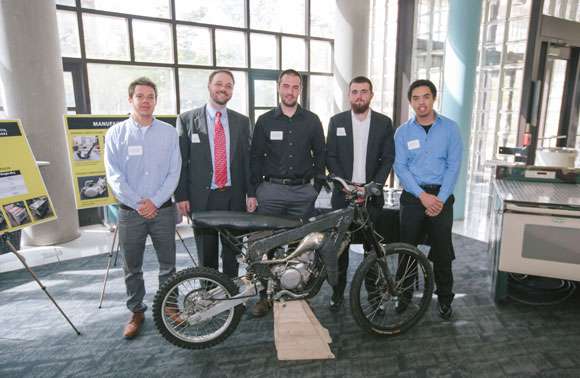 Engineering students spend a year working on projects for their Senior Design course, a capstone to their undergraduate studies. In the annual design competition, a panel of industry judges inspects each project and asks questions of each team of students. The judges select the best overall project ($1,000 prize) and a top project from each discipline ($500): civil engineering, computer science and engineering, electrical engineering and mechanical engineering. This year, the design competition added “multidisciplinary” as a fifth category.

This year’s contest showcased 19 projects in the North Classroom atrium. The largest team of the competition — the 14-member CU Denver Motorsports Formula SAE — built an open-wheeled, open-cockpit vehicle that will compete in an even larger event, the international intercollegiate Formula SAE competition in Lincoln, Neb., in early June. Meanwhile, one of the smaller teams, the three members of THE Smart Fridge, created a system that tracks inventory in a household’s refrigerator and pantry, and monitors weights of staples, such as milk and eggs, to remind consumers when it’s time to buy more.

One project looked back into history; the Amache Internment Camp Preservation team used engineering analysis to preserve, protect and enhance the Amache Japanese American Internment Camp in Granada, Colo. Other projects looked forward, including the Inexpensive, Sustainable and Remote Water Treatment project. With water treatment and desalination becoming a major global issue, this desalination system incorporates a multi-use computer control system with inputs and outputs for sensors, motors and other components.

Two computer science projects were designed to improve the lives of disabled people — The Coping Skills Game and Matchmaker Application Software — while the multidisciplinary group, Team QUADD (made up of mechanical and electrical engineering students), built and programmed a drone for bridge safety inspections.

Assistant Professor Dan Connors, PhD, faculty investigator for Team Stratus, Department of Electrical Engineering, said the team put in many late-night sessions and even a 24-hour no-sleep day when it produced a presentation video. Overall, the capstone project offers valuable problem-solving experiences that will help the students in their future careers, he noted. “Most of all, the students became more independent,” Connors said. “Very often, without design projects, students are constrained by the assessment criteria of the courses.” 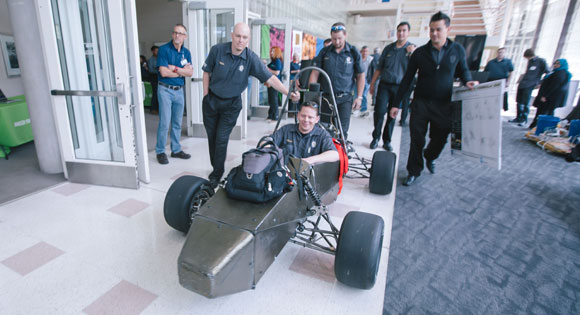 Members of the CU Denver Motorsports Formula SAE team take their race vehicle for a spin down the North Classroom atrium.

For many students, the capstone project is the best educational experience in their undergraduate years. As Connors notes, it gives students the opportunity to explore the unknown and to teach themselves outside of the university environment.

Alex Fenstermacher, of CU Denver Motorsports Formula SAE, said his team enjoyed building a marketable vehicle for weekend racers. “To be able to see everything go from design to fabrication has been a really great experience,” he said. “You get to see how your designs are implemented and come together. Plus, working on a team of 14 people it really gave us a great understanding of how to work with other people and design with other people.”

Ivan Laric and Pamela Ortiz of Team QUADD got the idea for a quad-copter that delivers live visual feeds of bridge inspections from their work in a City of Denver internship. They will soon show city officials a video of how their drone inspects the structural integrity of bridges. “We learned to work with a team,” Laric said. “We had to manufacture everything ourselves, so you learn to design differently to account for that. It was a big learning process for all of us, and communication amongst the team was a big deal.”

Sara Kreek of THE Smart Fridge team, which devised an affordable alternative to pricey Smart Fridges on the market, said, “We learned a lot about different programming, and what it takes to create an app. We also learned how to be more marketable and offer what people are looking for.”

Colin Whitmore, like several other judges, enjoys coming back each year to see the array of engineering ingenuity created by CU Denver students. Whitmore especially identifies with what the student entrants are going through because he participated in the Senior Engineering Design Competition in 1997 when he graduated from CU Denver with a mechanical engineering degree. His team that year built a Mini Baja that went on to finish ninth out of 60 entries at an international collegiate competition. 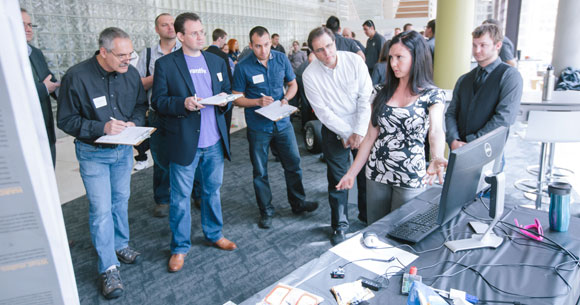 Now a senior project engineer for Jacobs Engineering in Denver, Whitmore said the skills he learned in the competition apply every day in his current job—just on a different scale. “I’ve been a department manager and project engineer on multimillion-dollar projects, and you’re doing the same stuff (as what’s done in the competition),” he said. “You’re coordinating all the things together, and you’re still responsible for the overall design and success of the project.”

Whitmore noted that Jacobs has hired a couple CU Denver CEAS students in recent years in addition to bringing several on as interns. So, the competition serves not just the students, but the judges as well — as a way to spot young talent.

This year, Kaiser Permanente (KP) scheduled its KPOne Innovation Forum in conjunction with the Senior Engineering Design Competition. Luke Scanlon, lead recruiter for KP, said numerous CU Denver engineering students stopped by to learn about potential openings and internships in KP’s information technology division. He was impressed with the caliber of students at CU Denver. “We have a ton of talented people that have engineering backgrounds — like what you’re producing at CU Denver — that just never thought of working for Kaiser,” Scanlon said.

The minds behind Team Stratus are certainly in demand, especially after the team won not only the overall prize in the annual CEAS senior competition but also the prestigious national Cornell Cup earlier this spring. “We had the opportunity to get scared quite a lot at the Cornell Cup, but it was just a lot of good practice,” says Saleh, who has been hired as an electrical engineer at Qualcomm in San Diego. 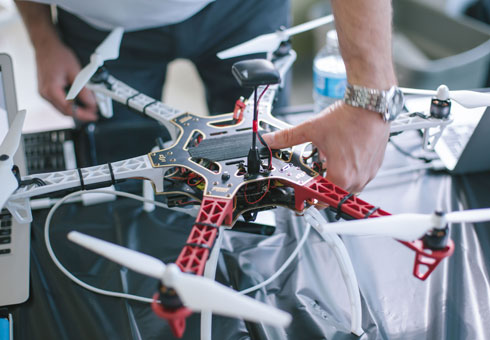 “Right now, we have a pretty easy project to present. You make a cool thing and you can just kind of go up and talk about it. You can talk about it for hours and not run out of stuff because there’s just so much there.”

As he makes his way down the long atrium hallway, White listens to one bright young mind after another talk about the “cool thing” he or she built with classmates.

“It’s a transition from academics into the real world,” White says. “They take all the things they learned academically and tie them into what they’re going to do in the business world.”

White went onto a successful career owning his own electrical contracting company. Now he’s happy to give back to future generations of CU Denver students who are, just as he did as one of CEAS’s first graduates, learning with purpose.

Ingber notes that White has endowed a professorship within CEAS as well as at CU Anschutz. “Don is so generous, it’s amazing,” he says. “Without him, the (design competition) event wouldn’t be what it is. He just has an incredible passion for not just the college but the whole university.”
Here are the winners of this year’s Engineering Senior Design Competition:
Overall:
Team Stratus
Departmental:
Civil: Franktown/Parker Flood Control Dam
Computer Science: Collector
Electrical: Inexpensive, Sustainable and Remote Water Treatment
Mechanical: Feathercycle
Multidisciplinary: QUADD

The overall prize is $1,000; each department winner gets $500. All funds are donated by Don and Karen White.