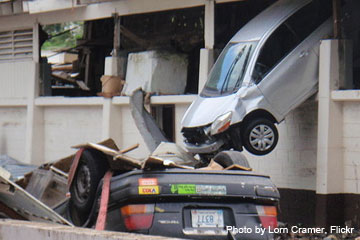 When a tsunami struck American Samoa in 2009, indigenous institutions on the islands provided effective disaster relief that could help federal emergency managers in similar communities nationwide, according to a study from the University of Colorado Denver and the University of Hawaii at Manoa.

The study found that following the tsunami, residents of the remote U.S. territory in the South Pacific relied on Fa’aSamoa or The Samoan Way, an umbrella term incorporating a variety of traditional institutions governing the lives of its citizens.

“We found that communities like this have strong traditions that may not fit into the Federal Emergency Management Agency (FEMA) model but they are still highly effective,” said study author Andrew Rumbach, PhD, assistant professor of planning and design at CU Denver’s College of Architecture and Planning. “We think these same kinds of traditions could play important roles in disaster preparation, response and recover in American Indian communities, Alaskan villages, and among other indigenous people.”

The study was published Thursday in the journal Ecology and Society and is available there to view..

The 2009 tsunami resulted from three undersea earthquakes that sent a wall of water crashing into American Samoa, killing 34, injuring hundreds more and causing tens of millions of dollars in damage.

Immediately after, the leaders or matai began organizing the young men or aumaga to begin rescuing tsunami victims and clearing debris from roads and critical infrastructure, said Rumbach.

“The aumaga were crucially important for emergency response because with such widespread devastation across the island, they were the de facto first responders,” he said. “Based in each village they are capable of responding to events locally and without having to be dispatched from larger population centers.”

The association of village women, aualuma, provided first aid, food and water to the victims.

Another traditional institution, the pulenu’u or village mayors, helped mitigate the destruction by sounding alarms in each community to warn of the impending tsunami. That action is credited with saving Amanave, a community of 300 that was able to evacuate before water destroyed virtually the entire village.

All the while, extended families known as aigas offered shelter, food and other aid to vulnerable individuals.

“In times of crisis these institutions played role of first responder all without specific training,” said Rumbach. “That response could be improved by being trained in CPR, evacuation of the elderly and other skills. But we could incorporate these kinds of traditional responses into FEMA.”

The lessons learned from American Samoa could be used in other island territories or traditional communities in the U.S.

“We often come in after disasters and set up whole new systems but in these places we could use institutions already in place,” Rumbach said.

“Traditional communities have a lot of capacity.”