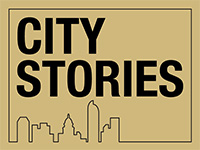 Knowledge changed everything for Candice Montoya, who was named the School of Education & Human Development’s 2018 Outstanding Graduate of the Year.

Montoya started college to meet a job requirement, and she graduated this month with a degree in early childhood education.

The mother of two worked full time as a Head Start educator and had a part-time gig cleaning office buildings when she enrolled at the university.

“I wasn’t about school,” said Montoya, who had worked in child care for more than a decade and didn’t expect to learn much that was new. “My perceptions of a quality education were set in stone, and I didn’t want to be doing anything different.”

Montoya’s transformation began with SEHD courses that encouraged self-reflection. She examined her own background and culture growing up in a modest Latino household in Commerce City.

Montoya was inspired by SEHD’s focus on culture-based, child-led learning. She learned to embrace the culture of the child and then connect the child’s experiences with academic content.

“At CU Denver, there was this idea from all the professors about finding out how to be the best version of myself,” she said. “My ideals and values changed. I really changed. I developed into this teacher who I really wanted to be. I’m providing really authentic educational experiences.”

Montoya is on a mission to become fluent in Spanish to re-gain part of her cultural identity. She didn’t speak Spanish at home growing up. Studying Spanish is now a family project with her own children, ages 12 and 14.

Montoya, the first in her family to graduate from college, said she is thankful for all of the support she received along the way and ready to put her education to use.

“I have so much family support. And Lori has held my hand since I started here,” Montoya said about her mentor, SEHD Assistant Professor Lori Ryan.

Montoya plans to work with families and children in poor, urban Spanish-speaking communities. She is motivated to create a third – genuinely safe – space where children can be themselves.

With graduation behind her, Montoya is poised for a future as a change agent, teacher, leader and lifelong learner. “I achieved much more than I ever thought would be possible,” she said.