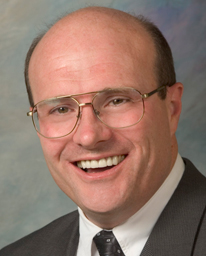 Ed Tauer is mayor of Aurora, Colorado, a city of 300,000 residents located on the eastern edge of metro Denver. He was elected mayor in 2003 after serving as an at-large member of the Aurora City Council since 1997.

Mr. Tauer has a solid vision for Aurora, one that focuses on strong economic development and job creation ensuring Aurora is a full service city where one can grow up, raise a family and retire.

As mayor, Mr. Tauer has made it a priority to seek out opportunities to serve as a leader in regional cooperation and partnerships. He also has been involved in shaping the city’s water policies and strategic planning efforts.

Mr. Tauer holds a master’s degree in Business Administration from the University of Colorado and a bachelor’s degree in Mechanical Engineering from Colorado State University.  Mr. Tauer worked as a marketing and product development professional in the software and telecommunications industry for 15 years before becoming mayor.

Ed, his wife Betsy, and their son live in the Village East Neighborhood.  He enjoys family activities, sports and making wood furniture.