Dinosaur Ridge, one of the world’s most famous fossil repositories, is once again proving its importance as a source of significant dinosaur track discoveries. This time it has revealed evidence of prehistoric raptors, with sickle claws reminiscent of those popularized in countless Hollywood films. 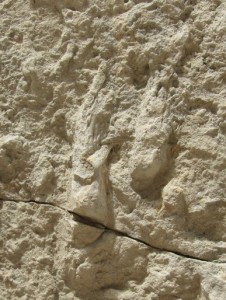 A recent study by University of Colorado Denver geologist Martin Lockley and his team reports evidence of two-toed tracks not previously known from Dinosaur Ridge. These tracks were made by Cretaceous carnivorous dinosaurs like Velociraptor, Utahraptor and relatives popularly known as raptors.

The study, published in the journal Cretaceous Research, not only identifies the first discovery of this track type at this well-known research site, it is also the first report of two-toed tracks in Colorado and only the second ever in North America.

“These two-toed tracks are very rare,” said Lockley, who has recently worked with Chinese researcher Lida Xing to document the global distribution of this type of track. “There are only about 16 reports worldwide and 12 of these are from China and Korea.”

Before Lockley’s discovery at Dinosaur Ridge, the only convincing reports of this track type came from the Moab area of eastern Utah in rocks about 112 million years old.  Lockley has worked with the Bureau of Land Management to document the site, concluding that the raptor tracks represent the first trackway, or trail of dinosaur tracks, ever found in North America.

Although Lockley and his colleagues have spent decades studying hundreds of sites in the younger, 100-million-year-old tracked layers at Dinosaur Ridge and throughout Colorado, they have never found evidence of raptor tracks. The reason, Lockley says, is that the recently discovered tracks were found in a different, older layer of rock dating back 105 million years.

According to Lockley and other geologists, those ancient layers represent different environments from the wet coastal plain habitats where the 100-million-year-old tracks are so abundant.

“A few million years is a long time in evolution and plenty of time for changes in the ancient environment and ecosystem,” said Lockley. “The discovery of these raptor tracks demonstrate the substantial changes in the Cretaceous landscapes in North America over time.”