Adventure finds Anthony Gherardini and he has the career to prove it.

Gherardini, who earned a Master of Public Administration degree from CU Denver, has been a singer, soldier, police officer and is now deputy executive director of the Colorado Department of Human Services. 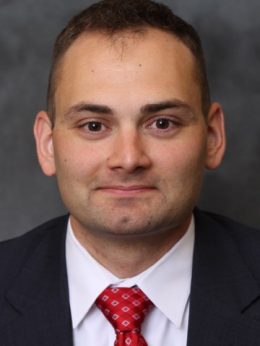 In his current position, he serves as the chief operating officer of an organization with a $2 billion annual budget, 5,000 employees and the operations of 19 direct-service facilities statewide. They include mental health hospitals, nursing homes, centers for disabled people and youth services facilities.

“If you can make yourself useful, and always bring a positive attitude, then success is assured,” Gherardini says.

A Colorado native, Gherardini grew up in Lakewood and attended Mullen High School. A budding opera singer, composer and performer, he spent his first year in college at Lawrence University, in Appleton, Wis., majoring in vocal performance.

So Gherardini moved home to be closer to family and enrolled at Colorado State University, where he graduated three years later with a major in political science and a minor in military science. During college he also enrolled in the Army ROTC program and enlisted in the Colorado Army National Guard.

Gherardini intended to serve in the active duty Army, but after meeting his future wife he instead decided to remain in the National Guard and join the Lakewood Police Department, where he worked as a patrol officer and later as a crimes against children detective.

A Tour in Afghanistan

Now with a wife, Jennifer, and a baby on the way, Gherardini learned in 2009 his National Guard unit would be called up for active duty in Afghanistan.

“As a young lieutenant of 25, I volunteered to go to Afghanistan,” he says. “It was post 9/11 and I had the desire to serve my country.”

Gherardini spent the next year at the Bagram Detention Center in Afghanistan, working in operations, ensuring the custody and care of more than 1,000 detained Afghanis. He

had his share of close calls, including a direct attack on the base during his deployment.

“We locked down the facility and organized a perimeter defense so if we were attacked we would be able to protect the prisoners and our soldiers,” he says. “So we had to wait for the bad guys to come if they were going to come.”

That day, Gherardini called his wife. All he could do was leave a voicemail, saying he loved her and his daughter, Gabby.

“I remember thinking that this might be the very last call I give my wife,” he says. “Luckily that wasn’t the case.”

Gherardini was awarded the Bronze Star Medal for meritorious service while deployed in a combat zone.

Taking the GRE in a War Zone

Thinking about the future after his deployment, Gherardini learned about CU Denver’s Master in Public Administration program. He took the GRE, applied and was accepted all while in Afghanistan. He graduated with a Master of Public Administration degree with an emphasis in Homeland Security & Emergency Management in 2014.

In 2012 and 2013, Gherardini commanded the HHC 193rd Military Police Battalion and lead responses to the High Park and Black Forest fires. In 2014, he joined the Colorado Department of Human Services as the director of safety and emergency management, and was promoted multiple times prior to being appointed to his current role last April.

As he moved up the career ladder, Gherardini found that the CU Denver Public Administration classes helped him, especially one in organizational management.

“I learned that organizations are living entities and must be treated as such,” he says. “Understanding the human dynamics that drive organizational behavior has been critical in my current role.”

CU Denver classes on negotiation have also been beneficial for his work with the Colorado Department of Human Services.

“Negotiating comes up frequently – whether it’s dealing with legislators, external political entities, local governments, counties and even our employees,” he says. “The common theme with all my courses was how to manage human dynamics with public policy and administration.”

Gherardini, who now has three daughters, recently left the Colorado National Guard to focus on his job and family. He may miss the excitement of emergency management, but he says his current position provides him ample challenges and opportunities.

“I think the benefit of me being a police officer, a soldier, a dad and an emergency manager is that I’ve been able to provide a perspective the organization didn’t have otherwise,” he says. “And I can say without any level of uncertainty that I would not be in this role if it were not for me going to CU Denver and earning my Master’s in Public Administration.”