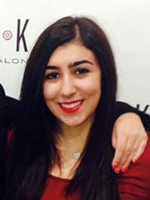 A psychology and biology major in the College of Liberal Arts and Sciences (CLAS), Moya came to CU Denver because it’s diverse, it’s close to home and she had a friend attending the school who loved it. She’s been working in the neuroscience and integrated psychology lab of Assistant Professor of Psychology Benjamin Greenwood, PhD.

Looking for a great opportunity?

Last December, she got an email from Greenwood, saying he wanted to nominate her for the HHMI internship. She spent a week during finals perfecting her application and was notified in January that she’d been accepted.

Under the supervision of Arun Asok, Moya did her internship at Columbia University in Nobel Laureate Eric Kandel’s laboratory. In New York City, she researched learning and memory, and specifically fear memory. It was a completely new lab environment and a new city, but she was surrounded by supportive and engaging people, including other students.

Moya hopes to complete a PhD in neuroscience and continue researching learning and memory, as well as topics like neuroendocrinology and drug addiction. 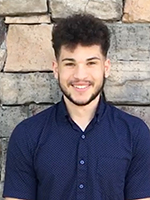 Mitchell is a biology major in CLAS who plans to pursue a career in medicine. He came to CU Denver because of its affiliation with the CU Anschutz Medical Campus. Though he’d considered MD/PhD programs in the past, the HHMI fellowship increased his interest in combined programs.

He completed his HHMI internship under Olivia Ho-Shing in Catherine Dulac’s lab at Harvard University. He worked on a study involving gene imprinting in the mouse brain. Imprinted genes form less than 1 percent of the genome and are unique, because their expression is based on which parent provided a gene.

“We were working to quantify and classify those on a single-cell level,” he said. “It was exciting.”

During his internship, Mitchell took on an increasingly independent role in research, allowing him to embrace a more leading role – planning experiments and ensuring time was well-managed. It was challenging and sometimes stressful. He even worked a number of weekends, but it was an invaluable experience.

“This summer made me more interested in the MD/PhD, because I learned about some program options, which got me excited about the combined programs, whereas before I had been leaning more towards the MD,” Mitchell said.