Professor of Integrative Biology Chris Phiel, PhD, is as happy to speak about kinases and CRISPR as he is baseball and Ulysses S. Grant. Like the 19th-century naturalists who came before him, Phiel is something of a Renaissance man. But he also carries himself with the approachability of an educator who values the importance of clear and engaging communication. An accomplished molecular biologist, Phiel is the sort of scientist whose every sentence about his research is silently punctuated by the phrase “Isn’t that so cool?”

Phiel finds kindred spirits in Jeffrey C. Hall, Michael Rosbash and Michael W. Young, a trio of scientists who collectively won this year’s Nobel Prize for Physiology or Medicine. Hall, Rosbash, and Young discovered molecular cycles that are intimately linked to time, sleep and wakefulness in most organic life. Like that group, Phiel studies the processes through which proteins are transformed and controlled, but he also stresses the “intellectually stimulating” importance of chasing scientific inquiry wherever it might lead. True to interdisciplinary form, Phiel isn’t comfortable being pinned to any single topic.

With his Jan. 23 Nobel at Noon presentation on the horizon, Phiel met with CU Denver Today to chat about the molecular misery of jetlag and the timeless wisdom of “Caddyshack.”

All presentations are at noon in the Jerry Wartgow Welcome Center in the Student Commons Building, 1201 Larimer St.

The presentations are free and open to the public.

What interests you about the work of Jeffrey C. Hall, Michael Rosbash, and Michael W. Young? Why do you think that group deserved to win this year’s Nobel Prize for Physiology or Medicine?

They won the award for their insights into what’s called “circadian biology.” Our circadian clock is this internal timekeeper that allows our bodies to do things differently at day versus night. We’ve all experienced the effects of circadian biology if we’ve switched time zones and had jetlag. There’s an intricate cellular network behind that, and these guys cracked into that for the first time, understanding—at a molecular level—what’s going on.

Circadian biology is a system in which genes are turned on, encoding for a protein, the protein gets made, but then the protein will get degraded at an appropriate time, and this is controlled by a cellular clock. Because the Earth is on a 24-hour clock, our bodies have evolved to be on a 24-hour clock.

But this isn’t specific to humans. Pretty much everything that’s living on our planet has circadian biology built in, at some level. This process is universal and fundamental, but we knew nothing about it until these discoveries were made. 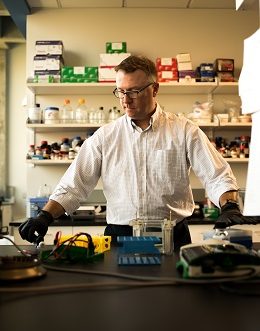 How does the work of Hall, Rosbash, and Young intersect with your own?

The whole process of proteins being produced and then degraded depends on an extra modification to a protein, called a phosphate group. We call that modification “phosphorylation.”

Where does your passion and inspiration for your work come from? Why did you enter the field of integrated biology?

I was always sort of engaged in history because when I was kid it was the Bicentennial. At that age, my grandparents took me to Mount Vernon and my other set of grandparents lived outside of Gettysburg. But I couldn’t see the career path if I majored in history. I had a great science teacher, and in college I seemed to have this knack for biology. So, I decided to major in biology.

In fact, when I was an undergrad, I hated labs because all my friends who were economics majors didn’t have labs and got to go home while I’d be stuck in a three-hour chemistry lab. So it’s ironic that I now have a lab through my office window.

That’s funny too, because for laypeople, the lab is such an iconic space of science; there’s a whole romance to it. How did you fall in love with the lab?

In graduate school, I learned quickly that molecular biology just made sense to me. The language of it, the rationale behind it, it all just fit with the way that I think. Getting in the lab, doing these experiments with my hands, cloning a piece of DNA for the first time, sequencing it, I mean—it’s trivial, but it’s also reaffirming.

I also started reading a lot. I read papers, all the time, of experiments that other people did. That resulted in a from-10,000-feet view of what science is; not just the day-to-day of what I’m doing, but why I’m doing it.

After I finished my PhD, I was lucky enough to get a post-doctoral fellowship at the University of Pennsylvania, in the lab of a Howard Hughes Medical Institute investigator. While it was a little intimidating at first, it was transformative. At the end of my post-doc, I had a paper published in Nature, which is the top science journal in the world. I just felt like there was more to be done, and I’d be kicking myself if I didn’t keep going.

What do you know now that you wish you knew when you were entering grad school?

I didn’t appreciate that my whole livelihood depends on government funding, and which way the political winds a

re blowing. It makes it quite a struggle. Most people who do biomedicine are extremely talented and passionate. But the amount of money to go around is not there. When I do get funded now, it feels really good—that’s my gold star for another couple of years, until I have to put my next grant in. It’s an achievement to get funding these days.

Is there a quote that really grounds your work?

I like the quote, “Two rights don’t make a wrong, but three rights make a left.” It’s from “Caddyshack.” You don’t always find exactly what you think you’re going to find, so if you aren’t willing to make those turns, you might not find the next thing. You need to be flexible in your approach to science. I always try to stick with what I’m good at, but also take my research in slightly new directions. It’s invigorating.

If you weren’t a professor, what would you be?

I would likely be a high school science teacher, as well as a baseball and basketball coach. A lot of people don’t know that I was a pretty good athlete when I was younger. In high school I earned 10 varsity letters in four different sports and I was on a state championship basketball team. And in college I was a four-year starter on the baseball team.

I was what you would call a cerebral player. I had some athletics gifts, but I had to rely on my guile as much as my talent because there were guys who were bigger and stronger than me. I’m hoping with the new Lola & Rob Salazar Student Wellness Center opening up, I might be able to get into some pickup games with other professors!

What gets you up every morning? What keeps you up at night?

It’s simplistic, but I try to make the world a better place. What really satisfies me is when I see students slowly starting to enjoy a class they only started because it was required, and realizing that it’s a lot more interesting than they knew.

I also take science literacy very seriously. I try to give students the most solid and contemporary scientific information that’s out there right now. Because our research is funded by the government, the money comes from taxpayers. So I think it’s important for people to know what their money is being used for. Lately I’ve been re-emphasizing that it’s not “fake science.” I try to emphasize what real science looks like, and I try really hard to explain it in a way that the average person can come away with a better understanding.