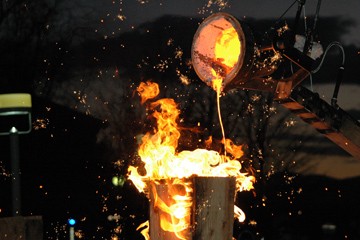 It’s called an Iron Pour. Scrap iron is heated to 2300 degrees or higher, becoming molten and is poured into molds — while sparks and fire fill the darkening sky. Free and open to the public, the Friday, March 22 spectacle is expected to draw a crowd of several hundred outside the Arts Building on the Auraria Campus from dusk until 10 p.m. Or, until the iron runs out.

CU Denver Associate Professor Rian Kerrane is the creative genius behind the performance event. Kerrane is the Area Head of Sculpture in the College of Arts & Media and she created the event in 2005 to bring attention to this creative process.

She describes this effort and the few others like it around the country as an underground resurgence of industrial casting in the art studio. “Iron is the core of the earth. Casting iron is hard work and doing it generates community. The communal aspect of doing it as a public performance makes the audience a huge part of the Iron Pour.”

CU Denver students and the general public are encouraged, not only to attend the performance, but to become part of it by carving their own tile then having their iron sculpture poured that night. The tiles, and instruction, will be available on site that night. Or, they can also be carved in advance March 19 and 21 from 9 a.m.- 3 p.m. in the Arts Building, Arts Gallery 167.1. Tiles are free to CU Denver students with a university-issued photo ID, and the charge is $10 for non-students.

The Iron Pour itself is a massive effort with some of the iron poured from as high as eight feet. Kerrane describes it as being like a waterfall of iron. “It is mesmerizing. The art is almost produced as a side effect, which is curious. The performance takes on a life of its own.”

A crew of 15-20 CU Denver students, faculty, and staff are outfitted in fireproof gear to complete a number of tasks. They turn sand on errant embers to guard against fire and injury. They weigh iron, add coke, iron and limestone flux to the furnace and “tap” the “well” to release the collected molten metal every fifteen minutes. Kerrane said that while it looks like chaos, the repetitive action is actually choreographed. And that makes visiting artist Matt Toole the choreographer.

Toole travels in from the Savannah College of Art & Design to work in studio with the students ahead of time, helping them with their molds and teaching them how to build and use the special equipment required for the Iron Pour.

Kerrane calls him a technician, fabricator and designer. “The students get the chance to watch him invent. And, many have told me that in just a few sessions with him they learned more than they had in all their previous years in school.”

In addition to collaborating with students to build a new cupolette, and leading the Iron Pour performance, Toole will present a free lecture on Wednesday, March 20; 7- 9 p.m. in the Auraria Campus King Center.

The excitement on Iron Pour day starts building early, as the equipment is assembled, the space prepared, and the fires started. “We are building up to something momentous,” said Kerrane. “What we are doing is generating a spectacle. And, demystifying the art process. It’s stimulating to see how art’s made. Community is what art is. We are reaching out to the public with a visual language that has a speech all its own.”

On Friday night, Mar. 22, that visual language will include red-hot molten iron pouring downward while red-hot sparks and flame reach toward the sky.