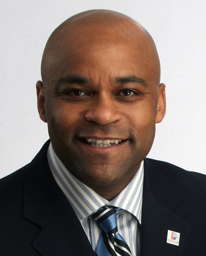 From school-age kid to hard-working adult, Michael Hancock has always been a leader. Despite adversity and tragedy, he has always found a way to triumph. With a master’s degree in public administration from CU Denver and a passion for public service, Michael has always fought on behalf of the people and businesses of Denver.

Michael and his twin sister are the youngest of 10 kids from an Army family that moved frequently. Michael was born near Fort Hood in Texas, and he and his family came to Denver when he was just 10 months old.

It was a tough childhood. Michael’s father was a drinker, and his parents divorced when he was 6. His dad returned to Texas and Michael’s mom moved the family into public housing. Michael remembers cold and hungry nights with no heat and no food.

Tragically, one of Michael’s brothers died from AIDS in 1996 and Michael promised him he would always fight for justice and fairness and give voice to the voiceless and power to the powerless. Six years later, one of Michael’s sisters was killed by an estranged boyfriend, fueling Michael’s advocacy for victims and his drive to end family violence in our community.

Today, at age 41, Michael is the proud father of three children — Alayna, Jordan and Janae — and he and his wife, Mary, have been married for 17 years after first meeting in middle school.

A natural leader from a very young age, Michael attended six elementary schools before settling in at Cole Middle School, where his classmates elected him student body president. At Manual High School (Class of 1987), Michael served as class president his first three years, statewide student council president as a junior, and Manual Head Boy as a senior.

After high school, Michael attended Hastings College in Nebraska (Class of 1991), coming home every summer and working in Mayor Federico Peña’s office. Michael earned his bachelor’s degree in political science with a minor in communications. He later was selected for the college’s highest alumni honor, the Bronco Award. After college, Michael returned home and earned a master’s degree in public administration from CU Denver in 1995.

Michael started his career in the early 1990s, holding down two jobs at the Denver Housing Authority and the National Civic League — while also pursuing a master’s degree. At the Housing Authority, Michael designed, implemented and oversaw the first-ever athletic, cultural and leadership-training programs for 11,000 inner-city kids living in public housing. He also helped write a state law outlawing drug possession within 100 feet of public housing.

With the National Civic League, Michael helped communities, nonprofits and other clients all over the country craft and enact strategic plans to solve economic and budget challenges, increase civic participation and improve governance.

Michael joined Metro Denver’s Urban League affiliate in 1995 as program director at a time when the economic-empowerment and civil-rights organization was struggling – struggling so much that Michael’s very first paycheck bounced! Undaunted, Michael rose through the ranks, developing a strategic plan, overseeing day-to-day operations and leading fundraising efforts.

He became executive vice president, interim president and then president in 1999. At 29 years old, Michael was the youngest leader of an Urban League chapter anywhere in America. He turned around an organization that lacked focus, relevance or a strategy. He developed a talented staff, created a nationally recognized and award-winning job-training program, and built private-sector partnerships with companies like Qwest, Comcast and AT&T.

After almost five years as president of the Urban League, Michael stepped down in 2003 when voters in northeast Denver’s District 11 elected him to the City Council. His council peers unanimously chose him to serve two terms as council President from 2006-08. He presided over the creation of the Denver Pre-School Initiative, strategies to fight foreclosures, and the implementation of the largest infrastructure improvement effort in city history.

As a councilman, Michael is widely recognized as one of the most accessible, constituent-oriented elected officials anywhere. He is a leader on neighborhood issues, city finances, economic development and children’s issues. “Great neighborhoods start with great schools,” Michael says.

On July 18, 2011 Michael Hancock was sworn in as the 45th Mayor of Denver. The University of Colorado Denver is proud to have played a role in Michael’s development as businessman, public servant and community leader.