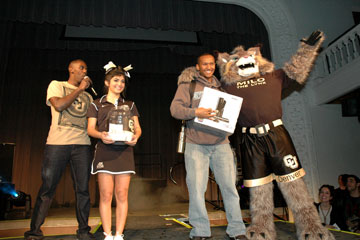 In a Spirit Thursday that pulsed with more energy than a glitzy NBA game intro, University of Colorado Denver students, faculty and staff today welcomed a furry and energetic new member to the campus community — Milo the Lynx.

A full house, more than 500 people, crowded the Tivoli Turnhalle for the noon event, which the Student Government Association for many weeks had promoted as “The Spirit Thursday You Won’t Want to Miss.”

From behind billowing stage smoke, Milo stepped into blinking lights and blaring music and into the view of the throng which gave the frenetic mascot a roof-blistering welcome.

From there, the event only picked up steam as the CU Denver Cheer and Dance team, emcee Thomas Evans and a group of other notable mascots — Dinger (Rockies), Miles (Broncos), Edson (Rapids), Rowdy (MSU Denver) and the CityHawk (Community College of Denver) — entertained the crowd.

Before Milo’s introduction, the crowd enjoyed complimentary Santiago’s burritos, Maui Wowi smoothies and an interactive graffiti wall. Then the lights went down and the voice of Alan Roach, renowned Denver sportscaster, boomed from the speakers: “You the students, alumni, faculty and staff of the University of Colorado Denver selected as your mascot the strong, proud lynx,” he said. “…He’s a symbol to rally around, to connect with, to reflect who you are. Ladies and gentlemen, the mightiest mascot on the Auraria Campus, Milo the Lynx!”

Between the cheer squad’s dance numbers, DJ RIPM kept the pulsing music playing as Evans, a CU Denver alumnus (Business, ’08, MBA, ’12), and Milo tossed T-shirts to the crowd. Several past and current members of SGA told the audience how the mascot came about. Former SGA President Ronson Fox said the notion of establishing a CU Denver mascot came up during his freshman year. “We didn’t have any community on this campus, we had no school spirit,” he said. “… We wanted students, faculty, staff, alumni — everyone — to be involved in this process. It was that sense of community that we all longed for and dreamed of.”

After a few licks of harmonica and several “yeahs!” by current SGA President Gordon Hamby, SGA Vice President Natalia Gayou explained that the mascot process started with a survey to students, faculty and staff in September 2011. SGA discovered there was interest in a mascot and began the process of sending surveys asking for mascot suggestions.

“We got a list of about 10 or 15 options, and we sent that out to you all,” she said. “From there we got two mascot choices — it was between the lynx and fourteeners. We put that out to you guys again, making sure we got what you all wanted. And the lynx came out. We formed a committee of faculty, administration, students and staff — the whole shebang — and here we are today with Milo.”

Gianny Lozada, a sophomore majoring in business management, said it’s about time CU Denver got its own mascot. “Other universities have them, and I think it was kind of weird that we didn’t have one,” she said.

Edith Lopez, a sophomore majoring in chemistry, agreed. “It seems more university-like. It will involve more people and heighten school spirit,” Lopez said. “We’re now more of our own university, and I think that’s very important. It also might attract younger people to the university.”

The festive event wrapped up with confetti cannons and a raffle giveaway of four prizes, including an XBox Kinect, a $250 Southwest Airlines gift card, cruiser bicycle and a iPad. After awarding each prize, Milo posed for a picture with the student winners.

Milo then stepped into the crowd and mingled and posed for pictures with those who created him — the students.

The mascot committee conducted a campus-wide search for Milo performers. For more information about Milo, the mascot process and where Milo the Lynx might be popping up on campus and in the community, click here.