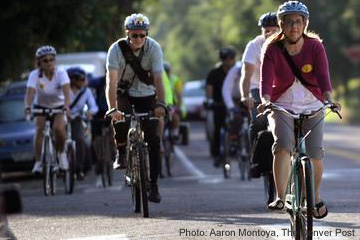 A University of Colorado Denver study examining collisions between bicycles and motorists, shows bicyclist safety significantly increases when there are more bikes on the road, a finding that could be attributed to a `safety in numbers effect.’

The study focused on Boulder, Colorado, which has one of the highest rates of bicycling in the country at about 12 percent of the population. That makes it one of the few U.S. cities with enough bicycling to achieve the safety benefits already documented by researchers in Europe, said study co-author Wesley Marshall, PhD, PE, assistant professor of civil engineering at CU Denver’s College of Engineering and Applied Science.

And Boulder’s close proximity to CU Denver’s downtown campus offered an ideal opportunity for the researchers and students.

“I was glad to be able to do this practical, hands-on research on bicyclist safety while a student at CU Denver,” said study co-author Krista Nordback, PhD, PE.

The researchers wanted to create safety performance functions (SPFs) for bicycles in Boulder. SPFs model the mathematical relationship between the frequency of crashes and major factors related to them. Yet while there are SPFs for vehicles, there are none for bikes.

The authors created their SPF for Boulder by studying crashes at intersections throughout the city where more than two-thirds of collisions occur. They compared the crash data to bicycle count data.

“Fortunately, Boulder was one of the first cities to establish a bicycle counting program back in the late 90s,” Marshall said.

The researchers found that the chance of collision decreased with more bicyclists.

The risk of accident was relatively high at intersections with less than 200 bicyclists per day.

“Anywhere above this threshold is where we are seeing the largest safety benefits,” Marshall said.

The reasons for this remain unknown.

“Other studies have hypothesized that when drivers expect to see a significant number of bicyclists on the street, their behavior changes,” Marshall said. “They are more likely to look over their shoulder for a bicyclist before taking a right turn.”

Cyclists may also be attracted to safer areas.

“But we think there is even more to the story and we’ll be looking for that in our next study,” said Marshall.

As bicycling increases in cities across the U.S. each year, the results could have national implications.

“In fact, we are beginning to find that cities with a high level of bicycling are not just safer for cyclists but for all road users,” he said. “Improving the streets to better accommodate bicycles may enhance safety for everyone.”

The study was co-authored by CU Denver’s Bruce Janson, PhD, professor of civil engineering and Krista Nordback, PhD, PE. It was published last month in the journal Accident Analysis & Prevention. The study is available upon request.