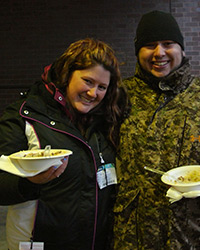 On a Friday night, in freezing temperatures and a mix of snow and rain, psychology major Maile Divine stood outside the Arts Building loading dock. She couldn’t wait to see the cast iron object from the sand mold she carved earlier in the day.

“It’s a heart with our anniversary date in it,” she said, huddling in the cold next to her fiancé, Josh Sunderman. “We’re getting married in August.”

The sand mold they carved was one of many offered for free to students and for $10 to community members, as part of “Performing Iron II”, presented by the College of Arts & Media (CAM) and CU Denver Live!

“The Iron Pour is really cool,” Divine said. She plans to display their cast iron heart at the wedding ceremony and to keep on their mantel—so there will be no excuses for forgetting anniversaries.

In spite of the cold, wet March weather conditions, about 200 students and community members came out to see the “Performing Iron II” spectacle featuring Matt Toole, a visiting sculptor and artist who creates sculptural performances.

“We all love fire. It’s primal—we’re attracted to it,” said Rian Kerrane, associate professor of sculpture, who leads CAM’s sculpture program, as well as the Iron Pour event. “So it’s great to bring it outside the studio to highlight what we do on campus.”

Inside an area cordoned off by “Caution” tape, students wearing hardhats and fire-proof suits moved about, all of them seemingly on a mission. Two of them hoisted up a bucket full of scrap iron and raw coke and dump it into the smoldering furnace of a cupola—a structure specially designed to heat metal to 2,500 degrees Fahrenheit.

“It’s metal, and that’s magical,” Kerrane said of iron casting, which dates back to the 5th century B.C. “It’s the core of the earth. We’re pouring what we’re sitting on.”

Up on the loading dock, a drummer beat out a rhythm for the students and faculty members to work to. Soon, fiery-looking liquid poured from a spout on the front of the cupola. Students caught the liquid in an industrial-style ladle, then walked it over to a row of sand molds and poured it into them, one by one.

In another corner of the work area, students raised a ladle on a long staff high up into the air, before pouring the lava-like iron, in a long, bright streak, into a mold on the ground. Cheers of “woo-hoo!” went up from the crowd.

“It was an amazing experience to come to Denver last year [for the first “Performing Iron,”] and I am happy to return,” said Toole, who led two workshops and a lecture during the week before the live pour. “It is clear … that the community of Denver is interested in these processes.”

CU Denver’s Iron Pour event focuses not only on the production of a cast iron object but also on the live performance. It is a choreographed show that requires the coordination of about 15 students who act “like a well-oiled machine,” Kerrane said.

“Having Matt Toole here to work with the CU Denver sculpture students is an exciting exchange of ideas, design, intellect and passion,” she said.

Set-up for the pour takes nearly the entire day, and much preparation happens days and weeks in advance. Students and faculty members procure and haul to campus several thousand pounds of scrap iron and coke. Then, they pound it with sledge hammers for hours to break it into smaller chunks, called “charges,” which can be poured into the furnace. And because you can’t simply buy a cupola at the store or order one online, the sculptors and metal-workers themselves build these towering furnaces.

“A big part of iron casting involves hard work by many people,” said Toole, who has been casting iron since 1996. “And this activity, by its very nature, creates a community of sculptors working together for the common goal of creating art.”

In the 1800s, more than 50 metal foundries were scattered throughout Colorado, Kerrane said. That was before the silver crash in 1893.

“Denver was a casting city,” Kerrane said, but today, CU Denver’s iron foundry is one of the few remaining in the state. Established in 1992 with a furnace for bronze and aluminum, the foundry added an iron furnace in 2005.

“Foundries are rare to come across at universities,” Kerrane said. Originally from Ireland, she has taught visual art at CU Denver for 10 years and has been instrumental in the evolution of the university’s foundry. A recent resurgence in the popularity of iron metal work has sparked connections and the growth of a subculture among the few foundries that exist.

The modern iron casting movement started in the 1950s with Julius Schmidt at the Cranbrook Academy of Art in Michigan, Toole said. Since then, it has expanded through academic programs across the country, and now, the enthusiastic subculture is spreading to Europe. The casting die-hards meet at conferences both in the U.S. and internationally, such as the Western Cast Iron Art Conference, which was held at CU Denver in 2008.

“The enthusiasm is growing, and the number of practitioners is as well,” Toole said. “[Iron casting] is an exciting way to make art.”

Through CAM’s annual Iron Pour event, Maile Divine and Josh Sunderman found a special way to honor their upcoming wedding, and the marriage to follow.

When they’re soaking up the sun on a beach in tropical Saint Lucia during their honeymoon next December, they may hardly remember the freezing-cold night when their anniversary heart was made—but their wedding date will live with them always, on their mantel, cast in iron.