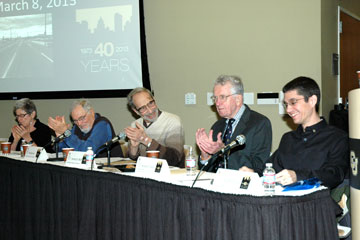 On Friday, a 12-member panel with deep roots in the University of Colorado Denver told the wild-and-woolly story of the university’s “Road to Independence and Beyond.” The program was filled with insight, laughter and reflections on the pivotal milestones in the university’s 40-year history.

Among the subjects covered:

Many other topics highlighted the entertaining panel discussion in front of a packed-full Terrace Room. The event, the first in a series to celebrate CU Denver’s 40th anniversary, was organized by the College of Liberal Arts and Sciences and hosted by CLAS Dean Dan Howard.

Other speakers included Chancellor Don Elliman and Provost Roderick Nairn. Elliman said the 40th anniversary provides a platform on which to both reflect and look forward. “We have, in my view, a bright future. I think the opportunity this campus has to grow and prosper is extraordinary.”

For a full history of the University of Colorado Denver | Anschutz Medical Campus, click here.

Nairn said, “we’ve come a long way,” noting that the University of Colorado Denver | Anschutz Medical Campus now enrolls more than 25,000 students. He thanked the panelists and countless others who contributed to making the university what it is. “We have a lot of the same challenges. We’re resource challenged and there’s lots of uncertainty out there. Some things never change in 40 years. And maybe the wisdom you all accumulated in working the last 40 years will help us work toward success in the next 40 years.”

Although CU Denver’s roots go back to 1912 when an extension of CU-Boulder opened downtown, the most pivotal events happened in the early 1970s. In 1972 voters approved a state constitutional amendment providing for CU campuses in Denver and Colorado Springs. In 1973, the amendment became effective and the Board of Regents renamed the Denver Center the University of Colorado at Denver. Based in the Tramway Building, it had nicknames, as Zuboy explained, as “Tramway Tech” and “UCLA” — the University of Colorado between Lawrence and Arapahoe.

The small-but-growing faculty had to contend with a long-ago university president who opposed CU expansion into Denver, which created the impetus for the launch of Metropolitan State College; large class loads and limited research resources; and steadily mounting pressure from the Legislature to merge with Metro State. There were interdisciplinary initiatives, attempts to increase the number of women in tenure-track positions, innovative classes and programs and, occasionally, “inflammatory” letters written to administrators making the case for an independent CU Denver.

Dillon and Wolf were among faculty on the leading edge of fighting for the campus’s independence. Wolf recalls that unless the 1972 referendum passed, faculty members’ future in Denver was in jeopardy. “We were afraid, we were energized, and we worked for its passage. It passed, but barely,” Wolf said. “We were now legitimate.”

In 1979, the university faced another crossroads. A state senator proposed merging CU Denver and Metro State into Metropolitan University of Colorado, prompting a “Save UCD” campaign.

“In our grandest moment, UCD’s inspirational protest halted that threatening cataclysm at the 11th hour,” Fallon said. “But on one condition. CU Denver would negotiate with Metro a way to reduce the duplication of coursework at the undergraduate level. That hot potato was then thrown directly to Dick Dillon and me to resolve.”

Fallon added, “After that crisis, the legitimacy of each of the institutions that shared the Auraria campus was no longer questioned. And CU Denver was free to pursue its development as a research university.”

The unease of those early days was illustrated in a story shared by LeMasurier, who left a professor position at Cornell University to come to CU Denver. “I was eligible for sabbatical in 1970 but I was afraid to leave because I wasn’t sure the place would be here when I got back,” he said, drawing chuckles from the audience.

Through it all, faculty members’ fondness for the students — who typically hold jobs and are older than traditional students — has been a constant. And vice versa.

Messamore said the university’s evolution has been “an amazing transformation. It was a much more serious, I think, environment than I had seen in Boulder or Texas Tech. I had a wonderful education and it served me well. Thank you, all of you professors, for what you did, because I didn’t even know you were doing it.”

Hamby, a current student, echoed the sentiment, saying “You guys did a great job and I’m thankful to be at this school.”

All agreed that the university continues to get better and that, despite the struggles, it is a fun place to work. “If it hadn’t been fun, I would have been gone a long time ago,” Damrauer said.

The audience asked questions and commented after all the panelists spoke. Laura Argys, an economics professor, said, “This really put things in perspective for me. .. I realized today that we owe a huge debt to all of you for the things that you did to create the institution that I’m at today and that I really love.”

Wolf ended the program by issuing a challenge. “When we started we were a small group of fighters,” he said. “When we became a real university in Auraria we became diffuse. I’d like to see us become a community again.”