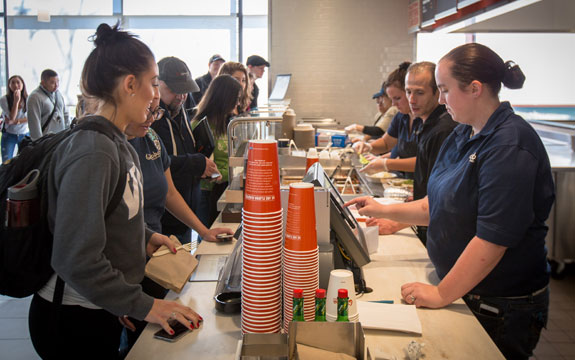 A large lunch crowd lines up to order at the new Qdoba restaurant in the CU Denver Student Commons Building on Oct. 28. Photos by Matt Kaskavitch.

“It’s a healthy Mexican food option and a great place to hang out with friends,” Gall said. “Also, it’s close to my classes in the North Classroom.”

Added Warner, “It’s convenient because it’s on campus. Now you don’t have to walk across (Speer Boulevard) and get lost on the way to Chipotle.”

The restaurant, open 7 a.m. to 7 p.m. Monday through Friday, welcomed its first customers Monday morning in its prime location—on the first floor of the recently opened Student Commons Building. 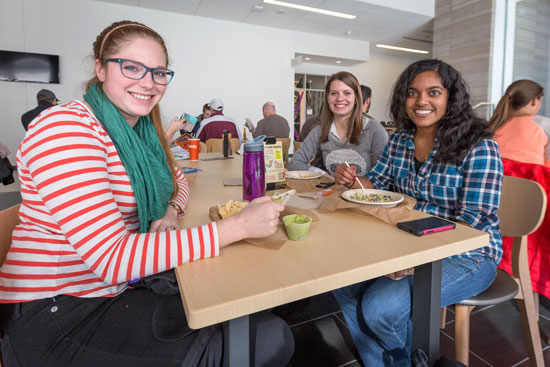 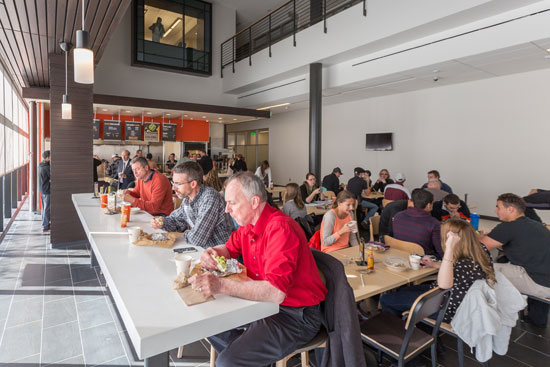 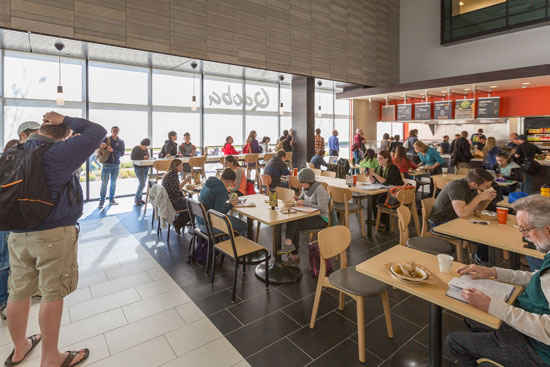 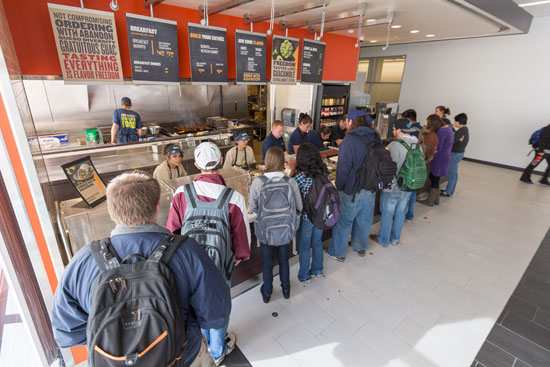 The response “has been fantastic,” said a Qdoba cashier. Long lines were even visible from Chancellor Jerry Wartgow’s office across the street in Lawrence Street Center. Wartgow decided it was high time he gave Qdoba a try.

“It’s delicious,” said the chancellor, as he dined on a burrito bowl on Tuesday. The atmosphere buzzed with a mix of students, faculty and staff members. Many folks chatted at tables, while some students sat and studied during their lunch hour.

A Qdoba grand opening event is in the works and will likely be held when classes resume for spring semester in January. The restaurant, also unusual for a Qdoba, has applied for a liquor license and is expected to soon add beer, wine and margaritas to the menu.

“This place has great energy,” Wartgow said, “and it continues to improve the connection to our education corridor.” The corridor, which defines CU Denver’s extension from the Auraria Campus into the city along Lawrence and Larimer streets up to the Business School at 14th and Lawrence, is now anchored by the Student Commons Building and its latest culinary addition.

Some students basked in late-October warmth while dining on the Student Commons Building’s sunny and spacious patio—another inviting feature of the new building and the CU Denver education corridor.

For those who like to spice up their morning, the CU Denver Qdoba offers—rare for the chain—breakfast burritos. The overall menu is somewhat streamlined compared to other Qdobas in that main selections are wrapped burritos (popular queso burritos included), burrito bowls, chips and salsa, and tortilla soup.

Qdoba was selected as the vendor in the Student Commons Building through a bid process. Managing the process was a selection committee that included students, faculty and administration representatives. Student input was collected as part of the process.

Plus, as the sign says in the airy establishment, who doesn’t love a free ‘extra’ of guacamole?

“The guacamole is great,” Gall said after dipping a chip. “It’s nice and limey.”