New research by Sarah Horton, an anthropologist at the University of Colorado Denver, reveals that employers in agricultural industries often take advantage of migrants’ inability to work legally by making their employment contingent upon working under the false or borrowed identity documents provided by employers.

Horton’s study, published this month in the Anthropology of Work Review, shows that many employers provide employees who do not have legal status with the valid work authorization documents of their friends or family. Farm workers call this practice, which essentially renders them invisible to the state and federal governments, “working as a ghost.”

Horton shows that by providing workers with borrowed documents, many agribusiness companies disguise their employment of undocumented immigrants from authorities, hide the use of child labor, and suppress worker’s compensation claims.

This kind of “identity theft” among migrant workers made news recently when a federal appeals court ruled that law enforcement can continue to prosecute undocumented immigrants for working with forged, loaned, or stolen documents. Horton’s research highlights the role of employers in this process, as they engage in what she calls “identity masking.”

Based on over 10 years of interviews and fieldwork with migrant farm workers in California’s Central Valley, Horton has identified three main instances in which identity masking occurs.

Employers often use identity masking to avoid a federal immigration raid or audit. In order to evade federal scrutiny, some labor supervisors furnish undocumented workers with the valid documents of friends and family.

Horton’s research shows that labor supervisors also use identity masking to mask the hire of a second group of unauthorized employees – minors. In California, children under 18 are legally ineligible to work more than eight hours a day or 48 hours a week, yet during the summer harvest season, workers routinely work up to 70 hours a week. In order to disguise the violation of state child labor laws, labor supervisors often require that minors work under the valid documents of adults.

Finally, identity masking allows labor supervisors to violate wage and hour laws. In California, farm workers are legally entitled to overtime once they work in excess of 10 hours a day, 60 hours a week. To avoid paying their workers overtime, some company supervisors require that all employees work under the identity documents of others on Sunday or lose that day of work.

In her research, Horton has found that the process of lending documents is also financially lucrative. Document lenders benefit because the wages earned by document recipients augment their Social Security and unemployment payments. In exchange for loaning their documents to workers, the friends and family members of labor supervisors often give them a kick-back.

Horton’s study helps reveal the complicated social dynamics on the ground that lead employees to work with the documents of legal residents and citizens.

“Even as undocumented migrants may continue to be arrested for ‘identity theft’ in states like Arizona, my research illustrates the role of employers in providing workers with invented and loaned documents,” Horton said. “It suggests that judges must carefully scrutinize any charges levied against undocumented migrants for working loaned documents, as employers may have more to gain from this practice than workers do.” 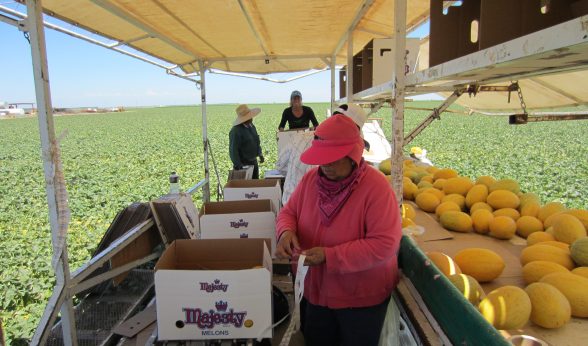