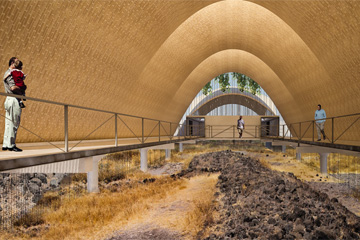 A University of Colorado Denver researcher has been appointed to an international team of advisors dedicated to creating a museum complex in Tanzania showcasing perhaps the most important collection of hominin footprints in the world today.

“This project is close to my heart,” said Associate Professor of Anthropology Charles Musiba (left), PhD. “I have always thought the site should be accessible to everyone, not just scientists.”

The roughly 70 footprints are 3.6 million years old. They were discovered in a layer of sediment in 1976 by anthropologist Mary Leakey in the Laetoli area of Tanzania. For years, scientists thought they were made by two adults and a child but now believe four individuals created them. The footprints are considered the earliest example of bipedalism among hominins. 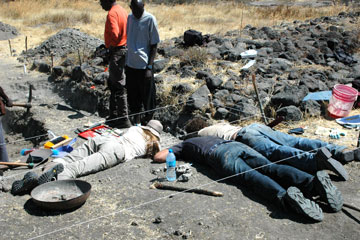 Retired CU Denver Professor of Geology Martin Lockley, an expert on fossils and dinosaur prints, is also on the six-member advisory panel.

In many ways the museum is the brainchild of Musiba, a Tanzanian-born anthropologist who has been studying the footprints since 1996 and has long championed protecting them while making the collection available to the public. Currently, the footprints are preserved by keeping them buried.

“Right now the footprints are covered up and the only way to study them is to re-excavate them, which could be damaging,” he said. “We would like to excavate half of the site and build the museum over it. We can then control the ambient air, the moisture and pH levels inside to protect the prints.”

Musiba and Lockley will advise Tanzania’s Ministry of Natural Resources and Tourism on how best to protect the Laetoli Conservation Project. The $35 million project will develop the Laetoli World Heritage Site into a state-of-the-art complex that will include a museum, research facility with labs and accommodation for 35 scientists and an education center that can host 50 students and six teachers. 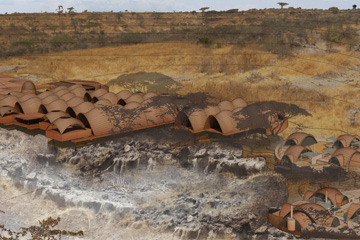 This is an overview rendering of what the museum and research complex at the Laetoli fossil site will look like upon completion.

The new facility is expected to be completed in about five years and will have a laboratory dedicated specifically for students and researchers from CU Denver, the premier public research university in Denver.

As director of CU Denver’s Tanzania Field School, Musiba takes groups of students each year to get hands-on experience working at Laetoli and the famed Olduvai Gorge where some of the earliest remains of our ancient ancestors have been found. 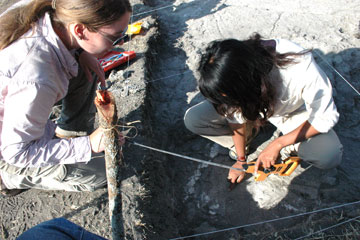 Last summer, he and his students discovered footprints of lions, rhinos and antelopes near those of the early hominins. They were made in about the same time period.

“The museum will feature exhibits of human origins, wildlife and geology while providing information about the current inhabitants of the region such as the Masai people,” Musiba said. “We would like to offer summer research opportunities to scientists from all over the world.”

Specifically, Musiba and his colleagues will develop plans to ensure the long-term survival of the hominin footprints. That will include doing site visits, reviewing plans for the museum and monitoring the safety of the footprints.

The museum site is near some of Africa’s premier tourist areas including the Ngorongoro Crater, Mount Kilimanjaro and the Serengeti.

“When you go inside this museum,” Musiba said, “you will go back in time 3.6 million years and reflect on the fact that your earliest ancestors walked here.”