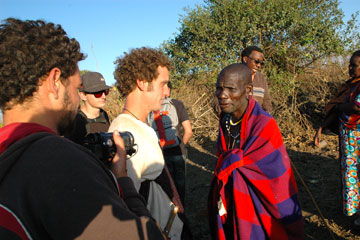 NGORONGORO CRATER — The Landcruiser trundles under a canopy of clouds gathered on the cool and lush rim. As the vehicle descends a wooded hillside, sunlight breaks through to reveal the flaxen crater floor. It’s interrupted only by a wash of pale blue, the life source for hordes of black specks now growing larger.

Animals. Thousands of animals. In all directions.

Two students in the bouncy back of the Landcruiser — one from CU Denver, the other from Texas A&M — stare out in disbelief.

“This is not real life,” Elicia Abella says as she looks across the arid plain. “I must be dreaming.”

Elanor Sonderman already ranks this as one of the best days of her life — affirming her decision to enroll in CU Denver’s field school in Tanzania. “This is nuts,” she says, looking into the crater. “This is crazy.” 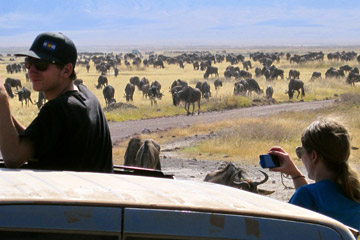 (Photo: CU Denver anthropology students Brian Miller and Tracey Lancaster take photos of a massive herd of wildebeests while on a safari in the Ngorongoro Crater in Tanzania.)

It’s the Fourth of July and their fellow Americans halfway around the world will watch fireworks. But any pyrotechnic display back home pales in comparison to this mind-blowing safari into the Ngorongoro Crater, one of the seven natural wonders of Africa.

“It was such an amazing experience. So spectacular,” says CU Denver anthropology student Corina Marin. “The history of the crater itself combined with everything we saw today just made for an amazing day.”

Most of the animals are wild, but some are domestic livestock being herded by Masai in blood red and bright blue shukas.

“It was probably the most beautiful, most scenic thing I’ve seen on the planet earth,” adds student Brian Miller. “It had kind of a Jurassic Park feel. I just felt like I was on another planet.”

‘One of my favorite days’

Jurassic Park is an apt description of this otherworldly place, formed 2.5 million years ago when a volcano erupted, its massive cone collapsing inward to leave the world’s largest unbroken caldera. First to the 11-mile-wide bowl came water and plants, then came the wildlife — virtually every variety of African animal. In 1959, the Tanzanian government set this remarkable habitat aside as the Ngorongoro Conservation Area, now home to more than 25,000 animals. Safari vehicles rumble down the one-way descent, take a circuitous route across the crater floor, and then bump their way upward along another side of the rugged escarpment.

Professor shares his passion for anthropology with students

The students’ safari takes them past zebras, gazelles, hippos, baboons, elephants, wildebeests and buffaloes. The convoy pauses when students spot a rare black rhino — a critically endangered species due to poaching — and, farther down the road, jaws drop as what initially looks like a sun-baked rock begins to move. A lioness stretches paws skyward as she rolls on her back under the African sun.

“Incredible,” says Corina, focusing her binoculars on the king of beasts. Ellie spots a male lion lounging in the grass next to the female. “Yeah, that’s an old man,” she says. “Beautiful, beautiful animal.”

Khashayar Asgari will remember this Fourth of July as “one of my favorite days of my entire life.” He especially loves seeing the hyenas and a small lynx-like cat, called a serval. “It was so bizarre and so foreign to me,” Asgari says. “You can see these animals in a zoo, but that’s not the real thing, it’s not their real habitat. It was awesome.”