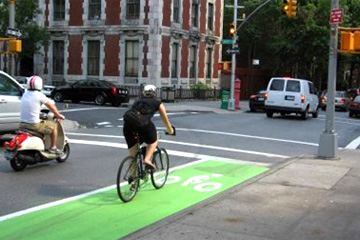 America’s streets are designed and evaluated with a an inherent bias toward the needs of motor vehicles, ignoring those of bicyclists, pedestrians, and public transit users, according to a new study co-authored by Wesley Marshall of the University of Colorado Denver.

“The most common way to measure transportation performance is with the level-of-service standard,” said Marshall, PhD, PE, assistant professor of civil engineering at the CU Denver College of Engineering and Applied Science, the premier public research university in Denver. “But that measure only tells us about the convenience of driving a car.”

Marshall co-wrote the study with Eric Dumbaugh, PhD, associate professor at Florida Atlantic University and director of Transportation and Livability for the Center for Urban and Environmental Solutions and Jeffrey Tumlin, owner and director of strategy at NelsonNygaard Consulting Associates in San Francisco.

According to Dumbaugh, many people assume roads are designed with all users in mind when in fact they are dedicated almost entirely to the needs of motor vehicles.

“Transit, bikes, and pedestrians are seen as worthwhile only by how much they reduce delays or increase speeds for motor vehicles,” he said. “Regardless of how efficient they may be in moving people.”

The study said that the values and interests of a specific means of travel – the personal automobile – dominate the thinking of those who design the nation’s transportation systems. And those values may not be the same as those of the communities they serve.

For example, level-of-service or LOS measures focus on traffic congestion and time spent at intersections. They measure the movement of vehicles rather than people so a single passenger car counts as much as 50 people on a bus.

“Cities like Denver have policies promising to ‘move people, not cars,’ but the typical traffic engineer continues to rely upon performance measures like LOS that favor automobiles,” Marshall said. “In most cases, these engineers are well-intentioned and simply following what has long been considered good practice; however, we all need to be more aware of the biases inherent to our typical metrics and harmful implications of continuing to use them.”

The study said these standards are based on faulty assumptions including the notion that traffic delays hurt the economy and congestion can be avoided by investment in infrastructure.

That’s because traffic congestion is usually a byproduct of a vibrant, economically productive city, the study said.

The researchers concluded by urging planners and policy makers to move away from faulty measures that result in transportation systems focused entirely on automobiles at the expense of more efficient, healthier modes of travel.

The study was published in the Institute of Transportation Engineers Journal and is available upon request.